Friday morning I took the #1 subway line to meet the film crew for IKE TALKS TO GOD at the corner of 122nd Street and Riverside Drive.

It was a beautiful day. Because I had the flu, fevers, chills, was nauseated and felt like dying I’d taken drugs that basically meant I felt no pain, nor my face or anything I touched.

Eli Shapiro auditioned me for this cameo role in his comedy film nearly two months ago and there was no way I was going to tell him about this minor medical inconvenience.

In the entertainment world the motto is ‘If you’re not in the hospital, show up.’  So I showed up and sat in the sunshine next to this 1800’s stone column building.

I noticed tour buses cruising the street, and even tour groups getting out and taking pictures.  There was no parking lot, no fences or billboards, and nobody standing around collecting money.  I snorted to myself ‘What is this, Grant’s Tomb?’ 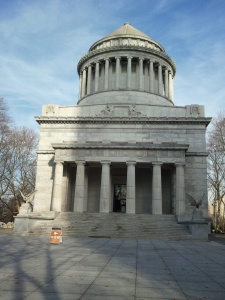 After a while as the drugs took a firmer grip I stood up and noticed the National Park Service Flag waving in the breeze and then saw the sign:  It’s Grant’s Tomb.  (Grant’s Monument, actually.) I started convulsing with laughter.  The film crew were busy doing something else; I doubt they noticed.

We filmed my scene in front of the steps of Grant’s Tomb. It’s going to look totally awesome in the film.

Between takes I went inside and checked things out. And the building was heated, which felt like heaven since it was a cold morning.  So the famous question:

A: A cute and friendly National Park Service employee.

I plan to go back for a more personal tour.

Shoot me a message Cancel reply

This site uses Akismet to reduce spam. Learn how your comment data is processed.